Whether you celebrate Valentine’s Day or prefer to pretend it doesn’t exist, here at WillCreate we want to share a little bit of love for some of our favourite advertising campaigns that we’re loving right now.

Check them out below: 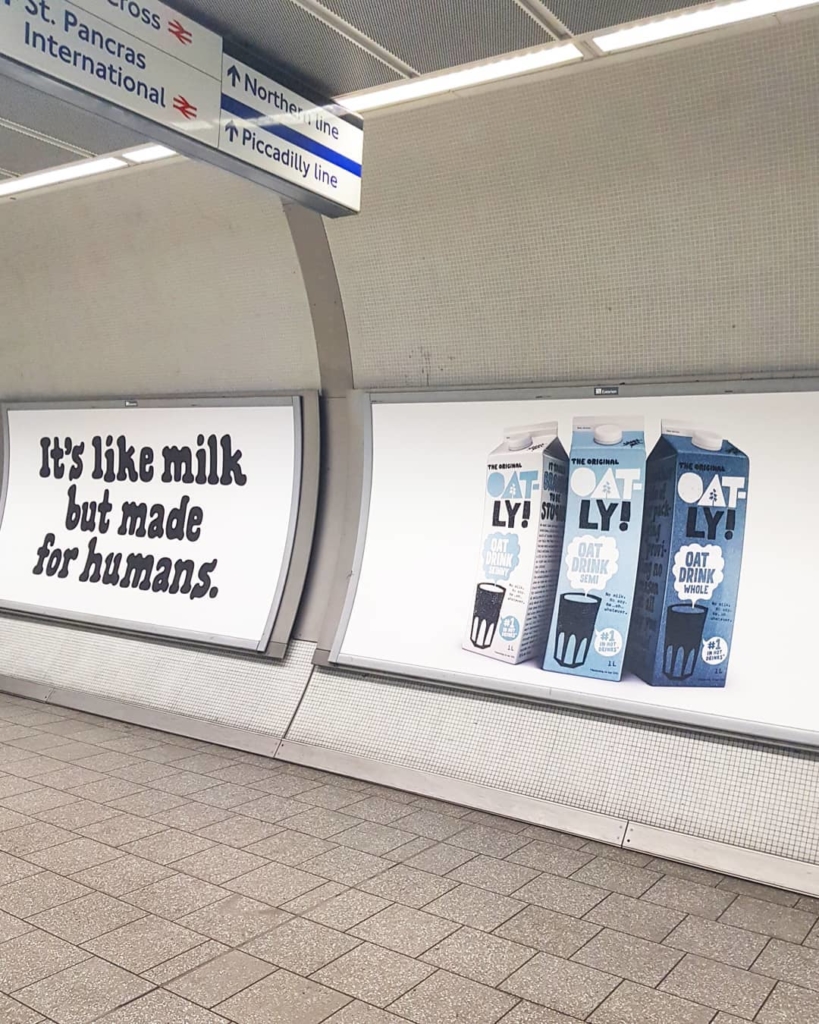 If you’ve travelled through London in the last few months then you will most likely have spotted one of Oatly’s huge posters with the slogan ‘It’s like milk, but made for humans.’ The £700,000 campaign was launched with particular focus on the capital city, with large parts of the available advertising space in Kings Cross and Oxford Circus underground stations taken over, as well as key spots in Shoreditch, Peckham and Brixton.

Oatly launched the same campaign in Sweden in 2015, at which point they were sued by the dairy industry. Not ones to be deterred, they were still determined to release it in the UK too.

We love this campaign for its straight talking, eye-catching stance that certainly got people talking. The risk certainly paid off as the response from UK consumers was extremely positive and it has been reported that the company far exceeded their sales targets during the campaign.

An ad which really caught our eye recently is Apple’s new iPhone XR ad called ‘Color Flood’. The advert features hundreds of people dressed in colourful jumpsuits running through an empty, grey town to the song ‘Come Along’ by Cosmo Sheldrake.

The idea behind the spot is to promote the XR’s retina display. The freerunners are at first running with their own colours – blue, yellow, red, orange, purple and green. Eventually they all join together in a stunning pop of colour to represent the phone’s new advanced display.

The ad was directed by Rupert Sanders who has previously worked with brands such as Jordan, Adidas and Reebok.

Gillette – ‘We Believe: The Best Men Can Be’

Shaving brand Gillette recently decided to take on a timely subject for their latest campaign. In response to the Me Too movement, the video urges men to hold each other to a higher standard and to step up when they see other men acting inappropriately towards women. The campaign cleverly plays on the brand’s 30-year tag line ‘the best a man can get’, replacing it with ‘the best men can be’.

Since its release, the company has received a barrage of both praise and abuse, immediately going viral with more than 4 million views on YouTube in 48 hours.

On Gillette’s website, it wrote: “It’s time we acknowledge that brands, like ours, play a role in influencing culture. From today on, we pledge to actively challenge the stereotypes and expectations of what it means to be a man everywhere you see Gillette. In the ads we run, the images we publish to social media, the words we choose, and so much more.”

Gillette has also promised to donate £1m a year for three years to non-profit organisations. It may be deemed controversial by some, but we think it’s a brave move and spreads a fantastic message. It definitely made some of us cry too!

The Super Bowl has become as well known for its adverts as it has the game itself, as companies try to outdo each other with funny and memorable clips. This year was no different but Bubly Water’s really stood out for us.

Bubly Water is Pepsi Co’s sparkling water brand and the ad’s aim was to promote their new flavours. In the ad, Grammy-award winning singer Michael Bublé is seen getting confused about the drink’s name which leads to a comedic exchange between him and another customer and a sales assistant. At the end he is seen sat on the floor changing the name on its cans from Bubly to Bublé in black marker pen.

Puns are always a winner in our books and this silly but simple idea is straight to the point and extremely memorable.

The Army spots potential. Even if others don't. #YourArmyNeedsYou

The Ministry of Defence’s latest ad campaign targetted the ‘snowflake’ Generation Z. The campaign begun with posters based on Lord Kitchener-style recruitment posters, calling out the likes of ‘Binge Gamers’, ‘Phone Zombies’ and ‘ Selfie Addicts’. There was also a TV ad to support this.

Although the campaign has been met with some criticism for stereotyping the younger generation, the British Army has seen the number of applications almost double in the first month. Applications grew to 9,700 in the first three weeks of January. This is double the figure for January 2018 and the number is also a five-year high.